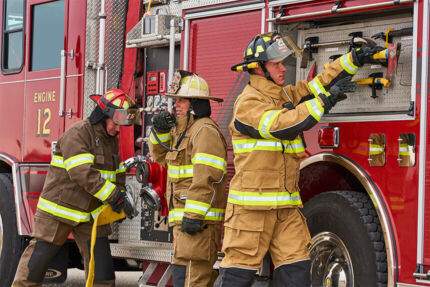 Fire protection, such as fire turnout gear, is used to shield firefighters from hazards including flame, extreme heat, and smoke during emergency responses. Working in these dangerous environments requires robust, multi-layered fire protection that can withstand extreme conditions.

Firefighters use a combination of fire protective gear to keep themselves safe on the job, including a fire coat, fire pants, SCBA (self-contained breathing apparatus), gloves, boots, and a helmet. Depending on the type of call they are responding to, firefighters may be required to wear different fire protection. 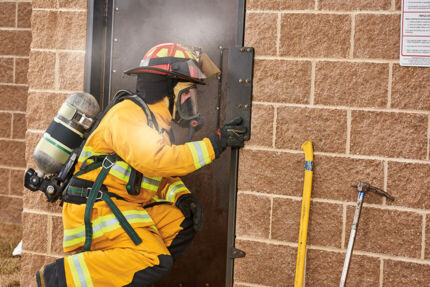 Firefighters are exposed to multiple hazards – sometimes during a single response call.

According to the NFPA, firefighters encounter physical hazards such as: 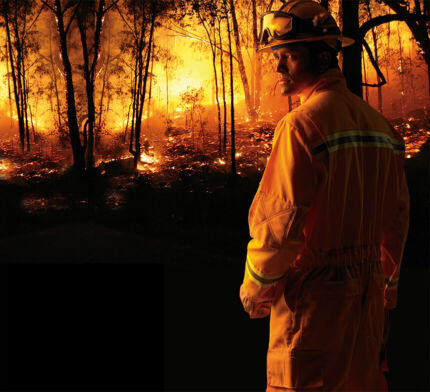 Not all fire gear is used to fight every fire. There are different standards that require certain levels of protection and equipment to adequately shield firefighters during emergency response calls. The types of fire gear include: 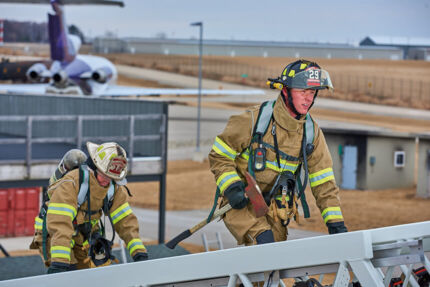 Firefighting turnout gear is used by firefighters working to extinguish a structural fire. In order to be certified to NFPA 1971, turnout gear must pass the Thermal Protective Performance and Total Heat Loss tests.[LG1]

Composed of a thermal liner, moisture barrier, and outer shell, turnout gear is often bulkier than extrication and wildland gear.

The outer shell is the first, outermost layer in fire protective gear. It acts as the first line of defense in protecting firefighters from heat and flame, offering one quarter of total thermal protection.

Since it provides flame resistance and protection against cuts from debris, the outer shell is made from extremely durable fabric. However, this layer must also allow for firefighters to move comfortably throughout the fireground, so it’s critical that the fire protective gear as a whole is designed with motion in mind.

Should the outer shell be compromised, the moisture barrier protects the firefighter when they come in contact with potentially hazardous chemicals, water, or even viral contaminants. The moisture barrier also helps improve the breathability of turnout gear due to its moisture-wicking properties.

The moisture barrier is composed of flame-resistant fabric and is the most delicate of the three layers in a set of firefighting turnout gear.

The final layer within a set of firefighting turnout gear, the thermal liner composes the remaining three quarters of total thermal protection. However, thermal liners can also greatly impact breathability, so it’s crucial that the right fabrics are used to deter any negative effect on the wearer.

Thermal liners are often a combination of non-woven fabric and smooth, quilted cloth. The cloth surface is often outward facing and must be slick to ensure easy donning and doffing of the gear, while the non-woven fabric should help maximize air flow between layers.

Wildfires play a huge role in the destruction of hundreds of thousands of acres across the globe each year. Not every department must prepare for wildland firefighting, but those who do understand that the requirements for gear are vastly different than standard structural turnout gear.

For wildland firefighters, there are various apparatus that the team must use to extinguish the flames – both the ground and from the air. Maneuvering tough terrain and debris, or climbing in and out of brush trucks and helicopters, requires wildland firefighters to be almost inhumanly quick and agile. Therefore, wildland gear is often much lighter than turnout gear.

However, wildland gear must still offer robust protection against flame and heat, plenty of pockets and options for tool storage, and be designed with durability, visibility, and mobility in mind. 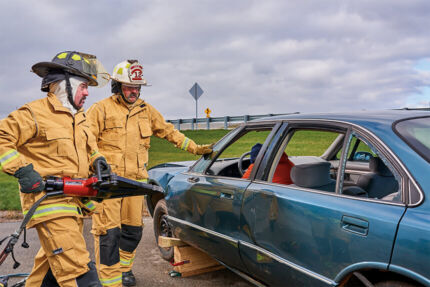 The majority of response calls a firefighter makes often will not involve fires. In fact, FEMA estimates that close to 64% of calls are emergency response or medical in nature.

For many departments, this makes extrication gear a necessity. The turnout gear purchased for structural firefighting is often bulky and very expensive, so taking turnout gear to an EMS call can cause the gear to wear faster.

Extrication gear is used when responding to incidents such as vehicular accidents or medical calls – usually situations where blood and other viral agents could be present. 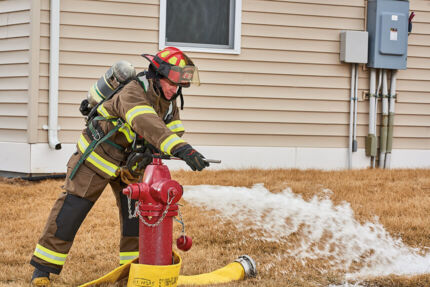 The National Fire Protection Association (NFPA) is the body that sets requirements for the design, performance, and certification for fire protective gear. Their statutes cover structural, wildland, extrication, and proximity firefighting PPE, among other items.

Here are some of the NFPA standards that often apply to protective fire gear:

Coming in contact with carcinogenic particulates is one of the greatest hazards in firefighting. When dealing with a structural fire, there are many synthetic materials and harsh substances that are toxic when they burn. The smoke carrying those elements comes into contact with fire protective gear and often the wearer, increasing the risk of cancer and other illnesses.

One of the best ways to protect firefighters and lengthen the life of fire protection is with proper cleaning and maintenance. NFPA 1851 speaks to the selection and care of firefighter PPE, including the use of barcodes for trackability, inspection intervals, fire protection cleaning methodologies, and storage requirements.